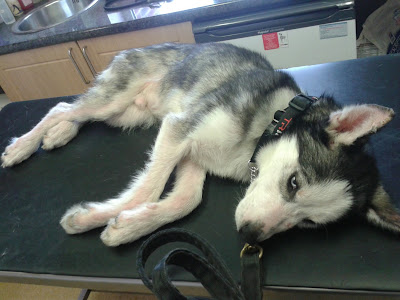 We had expected a very skinny and moth eaten 3-4 month only husky puppy.  What appears to have moved in with us is a very underweight, malnourished, moth eaten puppy that is at least 6 months old, quite possibly older.


He weighs 10kg, is the size of a 3-4 month old puppy, has a full set of adult teeth and has certain behaviours consistent with a male husky between 6-12 months.

When he first arrived he was very defensive towards all three of our dogs, which took us all by surprise.  Perhaps an attitude derived from the life he has led so far.  Or perhaps there is another reason, time will tell…. 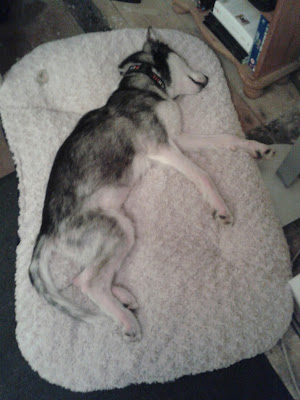 In the 24 hours that he has been here today the tension within the pack has settled and he has shown puppy like behaviour and respect for the big boys.  The boy huskies are helping teach him a few house rules and he is responding very well.  Kez is already taking on his “mother hen” role…
One thing that has taken both Ian and I by surprise is his attitude towards people.  He is a very friendly and very affectionate little boy.  Very inquisitive and not fearful of anything that we do.  We have already been able to start teaching him the word “no” and he comes to us when we encourage him to.

He would not settle or lie down all yesterday afternoon and evening, and I feared a very restless night for us all.  I decided to lie down on his bed and within seconds he lay down beside me and as I held him in my arms, he fell asleep.  He slept right through the night, only once awaking and asking to out for a little wee. 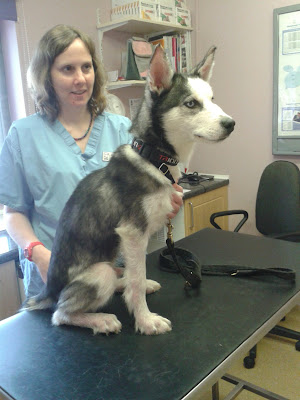 He was very chilled and laid back whilst in the veterinary surgery this evening, lying down to have his nails trimmed and very relaxed whilst being examined by the vet.

The only issue I had the whole time that I was there was when we exited the surgery and met four very aggressive sounding German Shepherds…..  Little Boy Blue was initially scared, but after two seconds of hesitancy he leapt forward growling and snarling like a ferocious lion!  To see such a pathetic and fragile little furry person react in that way was heart wrenching.  He certainly has a strong survival instinct, and an attitude that belies his very weak form. 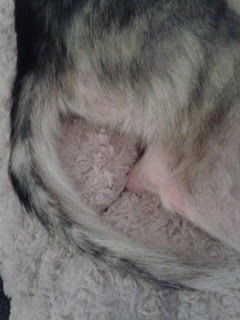 Little Boy Blue was found wondering the streets in Brentwood, near the railway station.  Some lovely people were able to capture him just before he escaped under a fence and onto the railway line.  They then took him to a local lady that owns huskies and she took him into her home.  As well as severely malnourished, he had sarcoptic mange (fox mange) and all the symptoms associated with a severe infestation.  This lady has taken brilliant care of him in the few weeks that he was with her – he has been bathed, fed and shown love and attention.

Sadly she could not keep him and so his journey now takes a different path as he becomes a temporary member of the Huskies Running team.  He will not be running for a very long time, but he will enjoy all the other benefits of being in the team! 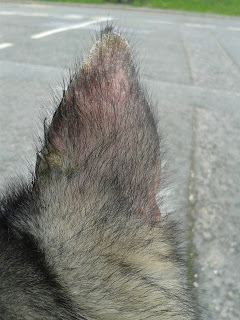 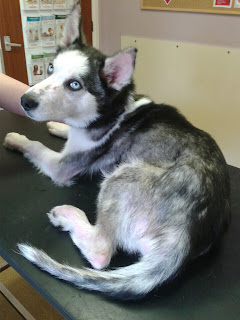 He has very poor bone and muscle development, his front legs work quite well(ish), but his back legs are very unstable.  His co-ordination is poor and he wobbles and falls over rather easily.

Little walks for now as we build up his body and strength.  It is too early to know how he will develop from this point forth.  Very stunted growth, but with the right care and attention the future is bright for Little Boy Blue and our objective is to turn this little boy into a beautiful glowing and happy husky.  When we do that he will fly this nest and find love with a forever family of his own.  We will be updating you on his progress, so watch this space to see something amazing. 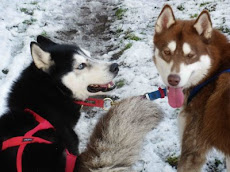